Did you know that… even spiders had an important role in astronomy? 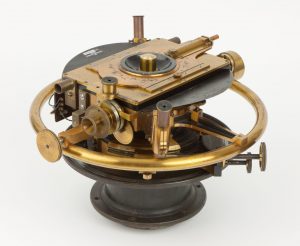 Merz filar micrometer (1881) that was attached to the 49 cm Merz-Repsold refracting telescope used by Schiaparelli at the Brera Astronomical Observatory.

By the end of the 18th century spider web strands were commonly employed for the reticles of astronomical instruments called filar micrometers. These instruments were used to determine positions, angular sizes and distances of the celestial objects observed with telescopes (the angular size of an object is its apparent size, as it appears from a given point of view, measured in fractions of a degree).

Micrometers  are calipers used even today to measure the size of small objects. Their first use in astronomy is credited to William Gascoigne, an English astronomer who lived in the 15th century and used one to measure the angular size of celestial bodies and the angular separation between two stars. To this end, he observed the objects  through  two metal pointers on a finely threaded screw on the focal plane of the telescope: by moving the pointers he could measure sizes or relative distances.

For the next century, astronomers tried different materials for the pointers,  each of them with pros and cons: metal was adequate for measuring sizes of bodies such as the Sun or the planets, and they were not subject to changes linked to weather conditions. Unfortunately,  they were too thick for point-like objects such as stars: in the XVII and XVIII centuries, they couldn’t be manufactured with diameters less than 20-­30 μm, that is, a few millionths of a metre. This may sound like a really small size, but when looked at through a telescope,  they are larger than the image of the star! Plant fibres, silk threads and hair were much thinner, but they absorbed moisture easily during the long nights at the telescope, thus changing in thickness and length, and this led to errors in the measurements. Finally, astronomers  tried spider silk, which is a lot thinner than metal wires (3-4 μm), more elastic and resistant to elongation and torsion, and does not change with the night’s humidity

Such was the importance of filar micrometers, that in 1883 astronomer David Gill wrote a sort of manual, to instruct his fellow astronomers on the proper way to collect, treat and position spider web strands on a micrometer.

The webbing of a micrometer is a process that should be familiar to all practical astronomers. […] A spider (the variety is marked by a cross on the back, and is found in English gardens about decayed wood) is caught, and placed on a wire fork. The insect immediately attaches a web to the wire and begins to lower itself by a web to the ground. This web is wound up on the fork till ten or twelve turns, separated by a convenient space, have been secured. A brush with varnish is then passed along the prongs ; the webs are thus securely fixed to the fork. The parallel prongs of the fork must be sufficiently far apart to allow the web-frame of the micrometer to pass between them […] being carefully arranged so that one of the webs lies nearly in the furrow ruled in the frame for its reception. […] If the surface of the frame is well polished, and the furrows sharply cut, without “burr,” the web should leap sharply and decidedly into its place. […] In experienced hands this method gives good results, but the following, which is generally followed on the Continent, is preferable. A web, about 2 inches longer than the width of the frame, is unwound from a cocoon, and small pieces of lead are attached to its extremities by beeswax. One end of the web, with its attached lead, is laid on a piece of cork floating in a tumbler of water ; the other end is allowed to hang down in the water, where it becomes thoroughly saturated and untwisted. It is then laid across the fork, and dropped into its furrows in the manner above described, the little lead weights exerting a definite tension. Varnish is immediately applied to secure the webs, and the frame is not touched till it is dry.